how is it now

hey just say your videos on the  serval 76 you got and I am thinking of getting one. I wanted to ask you what you thought of the build quality and if you regret getting and going with another company now that you have been using it for a while or if you plan on going back to system 76 when its time to get your next pc.

thanks for the videos.

I use my Serval on a daily basis, and I can say without question that it's the best computer I've ever had. The only upgrade I've performed since my review is adding an additional 32GB of RAM for a total of 48GB. It's been able to handle every task I've thrown at it, and since the RAM upgrade, I can multitask a huge amount with it as well.

The biggest issue I've had with it is an overheating problem. To be clear, this does not happen under normal usage– it's perfectly stable when I'm CPU rendering a video or GPU rendering an animation. However, if I try to GPU render an animation in Blender and CPU render a video in Kdenlive at the same time, the CPU temperature will often break 100 degrees Celsius, which causes the computer to immediately shut down. This is a little disappointing, as I specifically asked about thermals before I bought the machine and System76 assured me that they performed "extensive testing." That said, it hasn't been a problem since I now know not to render on both chips at the same time.

As far as build quality goes, I would have preferred it be made of metal, as the little ding in the plastic that I pointed out in my review does make the whole thing look a little cheaper than it really should. However, I don't actually touch the laptop all that often, as I'm most often using it with an external keyboard/mouse/display, so the materials don't really bother me. I do transport it every now and then for events, and it feels solid when closed. The display hinges are still very tight (in a good way), for what it's worth. The biggest con in terms of build quality is the screen's backlight bleed, which I showed in my review.

If I was going to get another laptop, I would absolutely go with System76 again. You just can't beat them in terms of performance. If I was going to get a desktop, however, I would build my own rather than purchasing one from System76 at this time. I'm very concerned with the direction that NVIDIA's Linux support is going, and unless their open-source driver situation changes, I wouldn't buy a desktop from System76 until they offer an AMD graphics option. For a laptop, though, AMD isn't an option for performance, so again, I'd totally go System76, especially because they also have desktop CPUs in their higher-end models.

Let me know if you have any further questions!

Standard member
very cool. I ordered it. You are right, there are not enough decent reviews on YouTube for system 76 and that scared me a little. Thank you for the review it really helped.

In one of your videos you mentioned you used a Korean screen.  I also got a good deal on Korean screens 2x1440 and don't mind getting a 4k Korean if available. Is the 4k you use korean or what kind is it? Is it worth going with a 4k screen? is it hard to use? Here is my setup. I hope to duplicate it with my serval 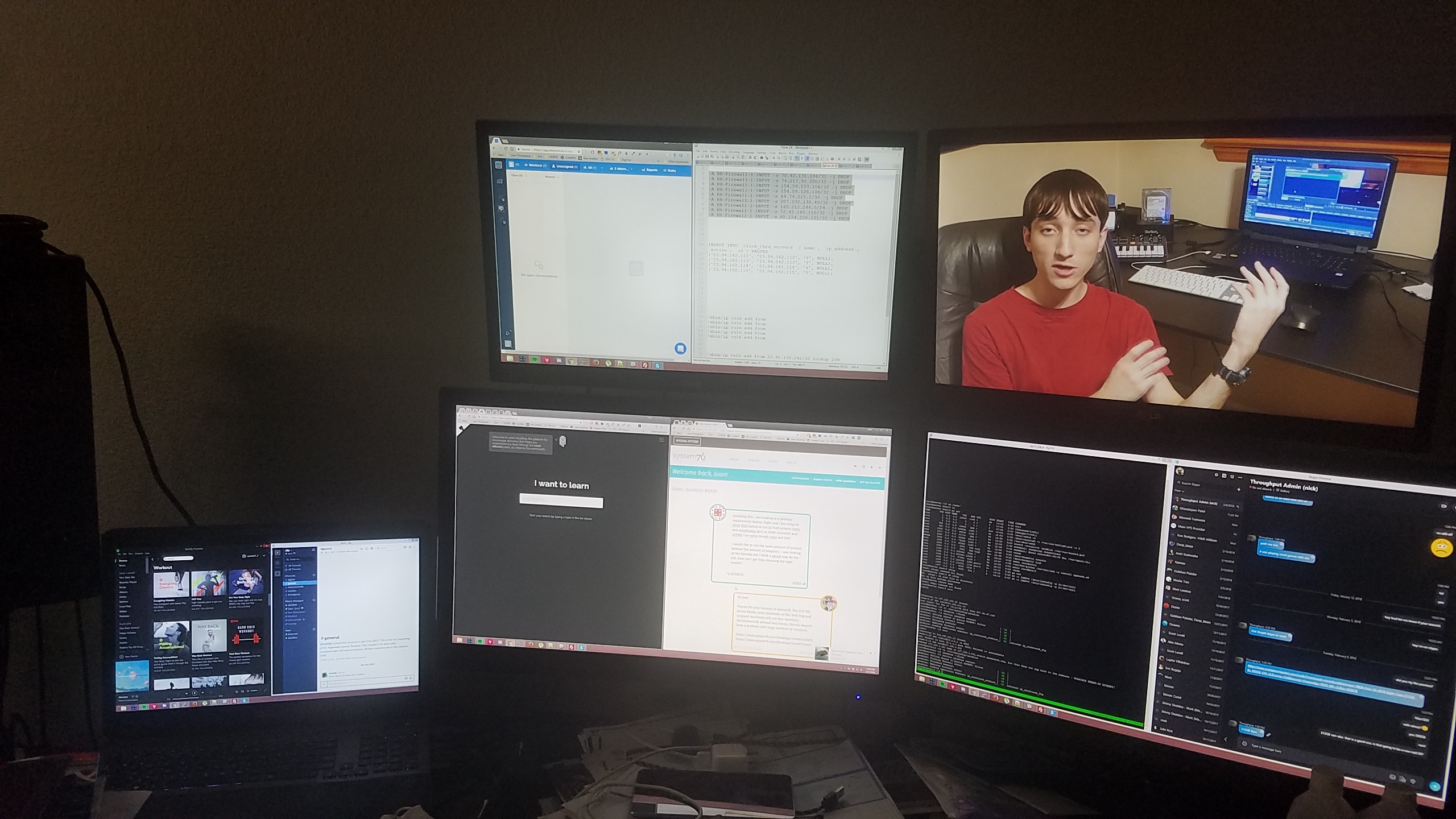 Is the 4k you use korean or what kind is it? Is it worth going with a 4k screen? is it hard to use?


To answer the first part, no, my 2k screen was a Korean model (QNIX), but my 4k screen is a BenQ model, which I consider name-brand.

For me, it was absolutely worth going for a 4k screen, because I always have a ton of stuff open and I can really use the real estate. Looking at your setup, I'd imagine you're the same way. It's not any harder to use than any other monitor because I got a 32-inch model, which means I don't have to do any DPI scaling. I wouldn't get a 27-inch 4k screen, 2k seems like the optimal resolution for that size.

You can check out my unboxing of the screen here if you want to see it. By the way, cool setup!

Standard member
That is funny so is mine. The one on the right is a QNIX I got from a seller on ebay. Have not had any issues with it up to now. I had another question. Are you still using the 4k screen with no scailing? Is 32' the size to get to not scale? I am thinking of getting the one you got. Do you have an amazon affiliate link or something like that?

For video editing have you tried lightworks?
Lightworks: The professional editor for everyone

Are you still using the 4k screen with no scailing? Is 32' the size to get to not scale?

Yes, I'm still using the 4k screen with no scaling, and 32" is absolutely the size to get so you don't have to scale.

Do you have an amazon affiliate link or something like that?

Nah, the last time viewers asked me to make an Amazon Associates account, Amazon closed it a few months later due to not enough sales. I'm not about to start pushing products on people, so I'm not planning on using that kind of system right now.

I don't have one comprehensive video for all of that, although I've made a couple of videos about my KDE setup before (see here and here). I used to have some home servers, but I'm not in charge of the network at my current residence, so all of my servers are running on Linode and DigitalOcean right now.

For video editing have you tried lightworks?

Yes, several times, and I absolutely hated it. It's slow, it's got an archaic UI, it can't handle most common media formats and thus requires inefficient transcoding. Those are the "benefits" you get for using proprietary software. I'll stick to Kdenlive, thank you very much!